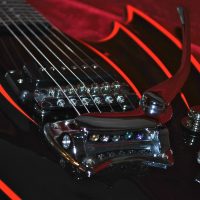 The perfect Collectible for a Batman Fan/Guitar player.

The initial run of 100 Wing-Bats was produced in 2009. They were endorsed by George Barris, maker on the ’66 TV Show Batmobile.

This particular Wing-Bat is Serial Number 66 – as in ’66 Batman – of the second run.

These guitars are super-rare and super limited edition, so get it now, while you can.